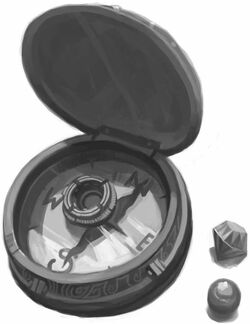 A wayfinder is a magic item used almost exclusively by members of the Pathfinder Society, so much so that the small device has become a calling card of sorts for the explorers and chroniclers. It functions primarily as a compass and also can emit light when instructed. It also contains slots that fit ioun stones. When a wayfinder includes an ioun stone in this manner, it reveals some new behavior which varies between wayfinders and depending on what stone is used.[1] Eando Kline's wayfinder, when fitted with a strange ioun stone, stopped pointing north and directed the pathfinder instead across Varisia and the Hold of Belkzen toward an unknown location.[2]