In ancient times, before the Earthfall, Varisia made up a large portion of the Thassilonian Empire. When the empire crumbled, so did parts of the planet itself, forming the landscape seen today. With the runelords powerless and slumbering, the remaining population of Varisia was left to create their own destiny. The result was that the Shoanti people began settling the north and eastern sections of the land while the ethnic Varisians, from whom the land takes its current name, settled much of the rest in their own vagrant way. Celwynvian was also abandoned near this time as the elves left Golarion. Janderhoff was established as a Sky Citadel at the end of the dwarven Quest for Sky.

Many years passed and the land and peoples became more stable, Shoanti battling giants and orcs while native Varisians wandered the land. Southern expansion and exploration of the largely wilderness region began in 4406 AR when Chelish colonists entered the land through Bloodsworn Vale.[3] This sparked a war between the settlers and Shoanti which last nearly a century before the Shoanti were pushed back to the Cinderlands. The settlers then founded Korvosa.

Another upheaval occured upon the death of Aroden and the subsequent decline of Imperial Cheliax, a large part of the population left Korvosa and founded Magnimar on the southwest corner of Varisia. These two city states have since been vying for resources, though not openly warring, while the Shoanti grow strong, and ready for war in the north.

Varisia is a vast frontier region in the northwest of Avistan. It stretches from the Steaming Sea in the west to the Mindspin Mountains in the east and from the Kodar Mountains to Conqueror's Bay in the south. The region possesses a variety of environments within its limits, from the swampy Mushfens of the south to the flame-scorched Cinderlands on the northern Storval Plateau.[4] 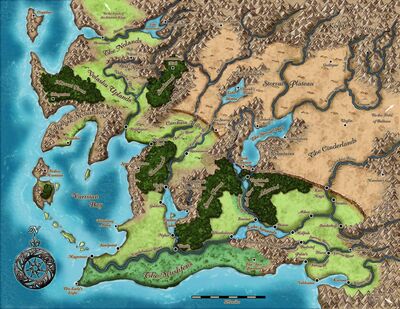 Rivers, Lakes, & other Bodies of Water[]

The Half-elves of Varisia face a lot of prejudices from both parental races, so they often prefer the harsh life in anarchic Riddleport or even an nomadic existence with the native Varisians and even the Shoanti to the life in the towns of southern Varisia [5]. Life is especially depressive in Korvosa where they tend to be the most pitied offspring of lustful Mierani ambassador Perishial Kalissreavil and a lot of bored young noble women from the Korvosan upper class [6].

The majority of the dwarves of Varisia live in the iron-walled town of Janderhoff. Having settled in the copper-rich foothills of the Mindspin Mountains centuries ago, with the coming of foreign interlopers the dwarves have seen their home change from a simple mining village to a bustling trading town. Despite Janderhoff’s fortresslike exterior, its people welcome any visitors who seek to do honest business and who don’t cause trouble. This hospitality extends to both the Shoanti tribes of the Storval Plateau and the Chelish traditionalists of Korvosa. While the barbarians and Chelaxians antagonize one another seemingly at every opportunity, Janderhoff has no mind for such bickering. The dwarves eagerly capitalize on their position as the sole passage for the worked goods of Korvosa and beyond onto the plateau and rare Shoanti foods, medicines, and ancient artifacts into the south. While Janderhoff offers great opportunities to enterprising dwarves, those who seek their fortunes away from their home’s copper steeples can be found among the workshops of Magnimar, the gas forges of Riddleport, hunting alongside the Shoanti, and anywhere else in Varisia that a profit might be made.

Halflings are a quite adaptable lot and can be found in the big cities as well as under the nomadic Varisians [7]. Good sailors, they often came with their Chelish masters to Korvosa and make the crew of nearly half the ships belonging to Korvosa's elite [8]. They can also be seen in Magnimar as well as in Riddleport where they often follow more shadowy ways and find great opportunities in the city's underworld [9].

Many Shoanti tribes live near the Hold of Belkzen with constant skirmishes between orcs and humans. Sometimes this leads to rapes which could eventually culminate with pregnancy. Few of these half-orc children survive into adulthood, and fewer decide to accept the difficult cohabitation with their human cousins in some of the Varisian cities [10].