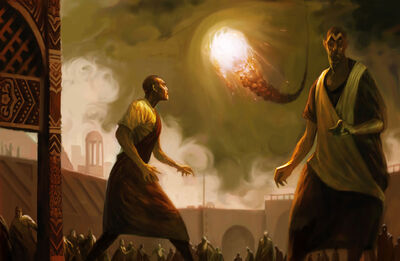 The Starstone is a meteorite that tumbled to Golarion in the circular eastern section of the Inner Sea in -5293 AR. This event, known as Earthfall, caused the destruction of the ancient empires of Azlant and Thassilon, created the Inner Sea, and ushered in the Age of Darkness.[1]

The hero Aroden lifted it from the sea in 1 AR, becoming a god in the process. He founded the city of Absalom and placed the Starstone in the heart of the city.[2] The stone now rests in the largest cathedral of the Ascendant Court where anyone can take the Test of the Starstone in order to attempt ascension to godhood.[3] So far, only three mortals are known to have succeeded in the task, Cayden Cailean, Iomedae, and Norgorber.

Retrieved from "https://pathfinder.fandom.com/wiki/Starstone?oldid=48276"
Community content is available under CC-BY-SA unless otherwise noted.