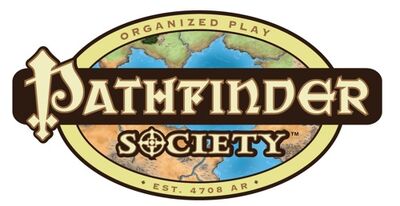 Pathfinder Society Organized Play (abbreviated PFS) is an organized play campaign run by Paizo Publishing. Similar to other shared-world campaigns such as Wizards of the Coast's Living Greyhawk, PFS releases two to three modules a month which are run simultaneously throughout the world. PFS centers on the sprawling city of Absalom, where five factions engage in a shadow war for control of the city's politics and economy. As participants play, the outcome of their adventures, actions, and deeds affect events on a global scale, turning the tide of secret wars between some of Golarion's most powerful nations. PFS games can be played at conventions, local gaming stores, or at home.

PFS was originally announced in March 2008. Pathfinder Society was originally led by veteran designer Nicolas Logue who accepted a full-time position on the Paizo staff to spearhead the operation, working in close conjunction with Joshua J. Frost, Paizo's Director of Sales & Marketing. Logue left the position in September 2008 to pursue a teaching career in England, and Frost took the helm of the campaign. The Society also utilizes a vast array of volunteers throughout the world to market and run games in their local areas and at industry conventions.[1]

The PFS system includes various factions for players to join. Every faction has its own unique history, culture, style and specialty. Each has its own modus operandi in the ongoing struggle for control of Absalom, and each offers the Pathfinders in their service different boons. A player's choice of factions is as important as her choice of character class or race, defining character in the campaign and tying the Pathfinder to one particular nation's destiny.[2]

The Society tracks and rewards the success or failure of a faction over the course of a season through a system of faction prestige points. How much reknown a Pathfinder has in his or her respective faction determines the value of items he or she can purchase, and the amount of free help their faction will offer for castings of spells and other assistance.

Factions available to players are Andoran, Cheliax, Osirion, Qadira, and Taldor, the five most powerful nations on the Inner Sea.

Season 0, which debuted at GenCon 2008, ran under the SRD 3.5 ruleset and officially ended on the eve of GenCon 2009. Pathfinder Society Organized Play converted to the Pathfinder RPG ruleset on August 13, 2009, at the start of Season 1.[1] Season 0 was advertised from its very announcement as being the Society's "playtest season" and a number of rules and concepts of the OP system were tested and subsequently altered during the transition to Season 1. Most notable among these was the idea of faction competition, which was abandoned for fear of creating a sense of losing in four fifths of the society's members.

In addition to the first four Pathfinder Society Scenarios, Gen Con 2008 also featured a special preview of the third Pathfinder Adventure Path, Second Darkness, called Ascension of the Drow. In this massive kickoff event, over a hundred players vied for their noble house to gain control of the drow city of Deraktinus.[3]

Season 0 contained a single interactive, held at PaizoCon 2009, called Grand Convocation. This event consisted of faction-specific encounters, individual challenges, site-based encounters, and a grand melee round-robin tournament. As with all interactives, however, the contents of this event are not considered canon in the Pathfinder Chronicles campaign setting.

Season 1 began on August 13, 2009 with the launch of the Pathfinder Roleplaying Game at GenCon. All Season 0 characters were permitted a one-time conversion to the new rules based on guidelines in the Guide to Pathfinder Society Organized Play, which released version 2.0 several weeks earlier. Notable changes to the system of play included the addition of GM rewards for "eating" scenarios, less competition between factions, and the inclusion of numerous non-core, setting-specific mechanics for legal use in PFS. Season 1 also made legal the running and playing of PFS games online, either via play-by-post games or tabletop emulators.

Scenarios released over the course of Season 1 included the first linked adventures in the form of series such as The Devil We Know, telling a complete story arc over the course of several scenarios. Additionally, PCs which had reached level cap at 12th level were given their first chance to play in special capped scenarios.

GenCon 2009 saw not only the launch of the new season with the first four PFRPG scenarios, but a two-night interactive entitled Betrayal in Absalom organized by Tim Hitchcock and Adam Daigle. The event, also designed by Tim, sent teams of Pathfinders throughout the convention center to remote encounters as they attempted to piece together a shattered relic before a malevolent spirit used it to assassinate a member of the Decemvirate. The remote encounters were designed by members of the Werecabbages including Liz Courts, John Ling, Rob Manning, and Joshua Stevens.

Each season consists of 28 scenarios, released on a schedule of two per month, with four released both in June for Origins/PaizoCon and August for GenCon. On October 2, 2008, Joshua J. Frost announced that some scenarios would be developed as part of an open call, in which members of the Paizo community would have the opportunity to write a scenario for official release. Since this time, a number of scenarios have been written as part of this ongoing process.[4]