The city of Magnimar (pronounced MAG-nih-mahr)[1] stands as one of the two major city-states of southern Varisia.[2] Founded by Korvosan dissenters in 4608 AR, the City of Monuments now stands as a rival to Korvosa in an open war of coin and words.

Magnimar is a large city located on the southwestern coast of Varisia where the Yondabakari River empties into the Varisian Gulf. The city is surrounded by the mostly inhospitable Mushfens.[3] The city itself is defined by two colossal landmarks which predate modern civilization by thousands of years or more. The Irespan is an ancient Thassilonian ruin, the easternmost end of a giant bridge which has now crumbled into the sea. This enormous relic stretched from Magnimar's other most noticeable feature, the three-hundred-foot tall cliff which cuts the city in two known as the Seacleft.[4] 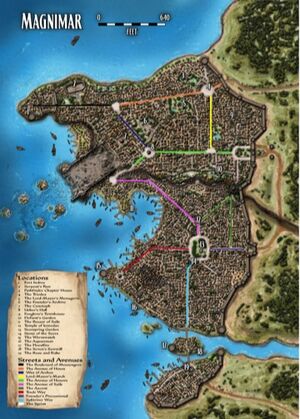 While these unavoidable monuments provide natural dividers to the city's three major districts (the Summit atop the cliff, the Shore below, and the Shadow under the Irespan); residents recognize eighteen official communities within Magnimar.

The wealthiest communities in Magnimar are located in the Summit atop the rise of the Seacleft, as are the city's centers of government, education, and arts. The Summit contains the following districts:

Home to the majority of Magnimar's working class, the Shore contains Magnimar's coasts and docks, and the following districts:

The Shadow district is the most derelict in the city and houses only the single community of Underbridge. It is home to the seediest of Magnimar's inhabitants and most members of the government take an "out of sight, out of mind" approach to the district's problems.[5]

Magnimar has begun to slowly expand her sphere of influence to encompass many nearby settlements and communities.[6] This is a list of but a few that have come under the jurisdiction of Magnimar.

Magnimar is ruled by two official political bodies—the Council of Ushers and the Office of the Lord-Mayor. This two-tiered system was established at the city's founding to ensure that no single person ever had too much control. Despite the idealist intentions of the city's founders, over the last century, both offices have become more power-hungry and less effective at representing the needs of the city-state's citizens.[4]

The Council of Ushers[]

The Council of Ushers serves as the legislature of Magnimar and currently contains 117 members. Of these, many are nobles whose families have held seats for generations, back to the time when the Council was but fifteen members large. With many more seats now that there are noble families, dozens of seats are filled with scheming merchants and greedy power-seekers, as well as a frustrated number of genuinely altruistic activists and honest merchants all vying to have their personal causes (many of which are entirely self-serving) heard and passed into law. The Council meets in austere Usher's Hall in Capital District.[4]

The Office of the Lord-Mayor[]

When legal arbitration is needed above and beyond what the city guard themselves can handle, the legal system of Magnimar calls upon the Justice Court. This body of thirteen Justices is the highest court in the city state and rules on disagreements as well as the guilt or innocent of those accused of particularly heinous crimes. The Court meets in the Pediment Building, which also serves as a prison for the city's most hardened criminals, located in a dungeon deep beneath the building called "the Hells."[7]