Pathfinder Wiki
Register
Don't have an account?
Sign In
Advertisement
in: Pages that need to be updated, Articles requiring cleanup, Organizations

Edit
This page contains older information and needs to be updated. Refer to the discussion page. 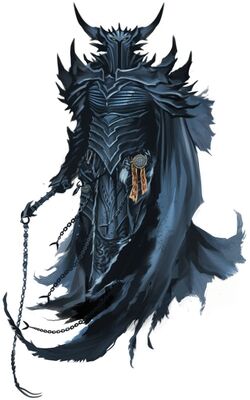 The Hellknights are an order of law enforcers interested not so much in the social goodliness and charity typical of paladins but in the foundation and stringent maintenance of order. In their iron-handed exaction of law—specifically, the laws of their various orders and their home country of Cheliax—Hellknights emulate the most organized and effective armies in all the planes: the legions of Hell. They are not concerned with morality, they are not concerned with methods, they are concerned with results. If people cannot be trusted to obey the law out of their own senses of civility and social righteousness, then they will be treated like beasts, learning to obey out of fear of a master's stern hand.

Regardless of their severity, Hellknights are not an evil group. Although there are doubtlessly numerous evil members—particularly among the upper echelons of power—the majority of the orders are lawful neutral, with lawful neutral, lawful evil, and lawful good members filling the ranks of each. The study of Hell’s tenets and even the summoning of devils are tools meant to intimidate and strengthen the individual resolve of the orders’ members. Hellknights are taught to replace emotion with steely discipline. They train with summoned devils, the signifiers of their orders coaxing the ingenuity of diabolical tactics from infernal tongues, while the rank and file members spar against the very denizens of Hell—making nearly any future conflict a far less daunting prospect. They learn that sacrifices must often be made for the greater good, obey draconian regimens of military conduct, commit to encyclopedic memorization of the laws of their orders and local governing bodies, and undergo constant drills to train their bodies and minds.

While Hellknights are widely feared and respected, the common Hellknight joins out of a sense of duty and wish to be a part of something greater, seeing a world ruled by just laws and free of rampaging beasts and cheating thieves as a future well worth striving toward... even at the sacrifice of a little freedom. Countries and rulers sometimes invite Hellknights into their lands, leaving the dirty business of harsh law enforcement to an already loathed third party, although, convincing Hellknights to leave once they've been welcomed sometimes proves problematic for more freedom-loving societies.[1]

Every order of Hellknights has a distinctive, intimidating style of full plate armor that distinguishes them from the others. All Hellknights wear the armor of their order as a matter of pride and are rarely seen without. The Order of the Nail’s armor, for example, features a horned helm and demon face breastplate.[1]

There are numerous orders of Hellknights. The majority have holdings in Cheliax, but a few have expanded or moved to operate outside the country, most typically in regions formerly held by the empire. At the current time there are seven major orders:

Order of the Rack at Citadel Rivad near Westcrown

Order of the Scourge at Citadel Demain near Egorian

Order of the Nail at Citadel Vraid near Korvosa

Order of the Pyre at Citadel Krane near Ostenso

Numerous lesser orders of Hellknights exist, although few are known outside the borders of Cheliax. For example, Egorian's Order of the Scar stalks murderers and assassins, while the Whisper Woods' Order of the Pike hunts down monsters that flourish in civilized lands. Although less pervasive, these smaller orders are only slightly less feared than their better-known brethren.[2]