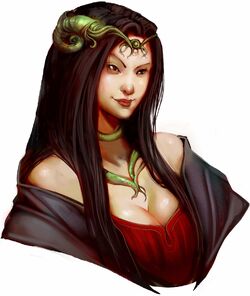 The Chelaxian (pronounced che-LAX-ee-en)[1] people have spread from their origins along the coast of the Inner Sea across much of Avistan. They are the true legacy of the once great imperial Cheliax whose empire once encompassed kingdoms as numerous and varied regions as Andoran, Galt, Molthune, Nirmathas and Sargava. While the empire of Cheliax may now be gone, the Chelaxian people live on, still inhabiting all of their former territories and beyond.[2]

The Chelaxian people come from the merging of two different people, the ancient Azlanti whose blood, they proudly claim, still runs strongest in modern Chelaxians, and the northern Ulfen. They tend towards dark eyes, dark hair and pale skin. Their pale skin is the main difference between Chelaxians and their Taldan rivals, who also claim descent from the ancient Azlanti. Chelaxians favour rich clothes that allow them to show off their wealth and stature but that rarely become as ludicrous as the fashions of Taldor.[2]

The Chelaxian people once boasted one of the largest empires in modern Golarion. Their empire rose as Taldor's empire waned. They once controlled the lands now known as Andoran, Galt, Molthune, Nirmathas and distant Sargava and Varisia but their influence extended north as far as the Lands of the Linnorm Kings and as far south as the Napsune Mountains in Garund. This empire was shattered by the death of Aroden and the rise of diabolism in Cheliax thanks to House Thrune. The break up of the empire of Cheliax has robbed the Chelaxian people of their shared heritage. Now half a dozen separate nations strive to create their own future some still under the influence of infernal Cheliax others as newly independent nations.[3]

The Chelaxians as a people are often renowned for their more negative traits and are thought of as arrogant, ruthless and ambitious. There are positive traits generally associated with Chelaxians as well, including being organised, intelligent and cultured. Apart from their legendary wrath there is little else that is true of all Chelaxians as they are now split across such varied regions. A Chelaxian living in Andoran has vastly different values to a Chelaxian living in Cheliax or Galt.[2][4]